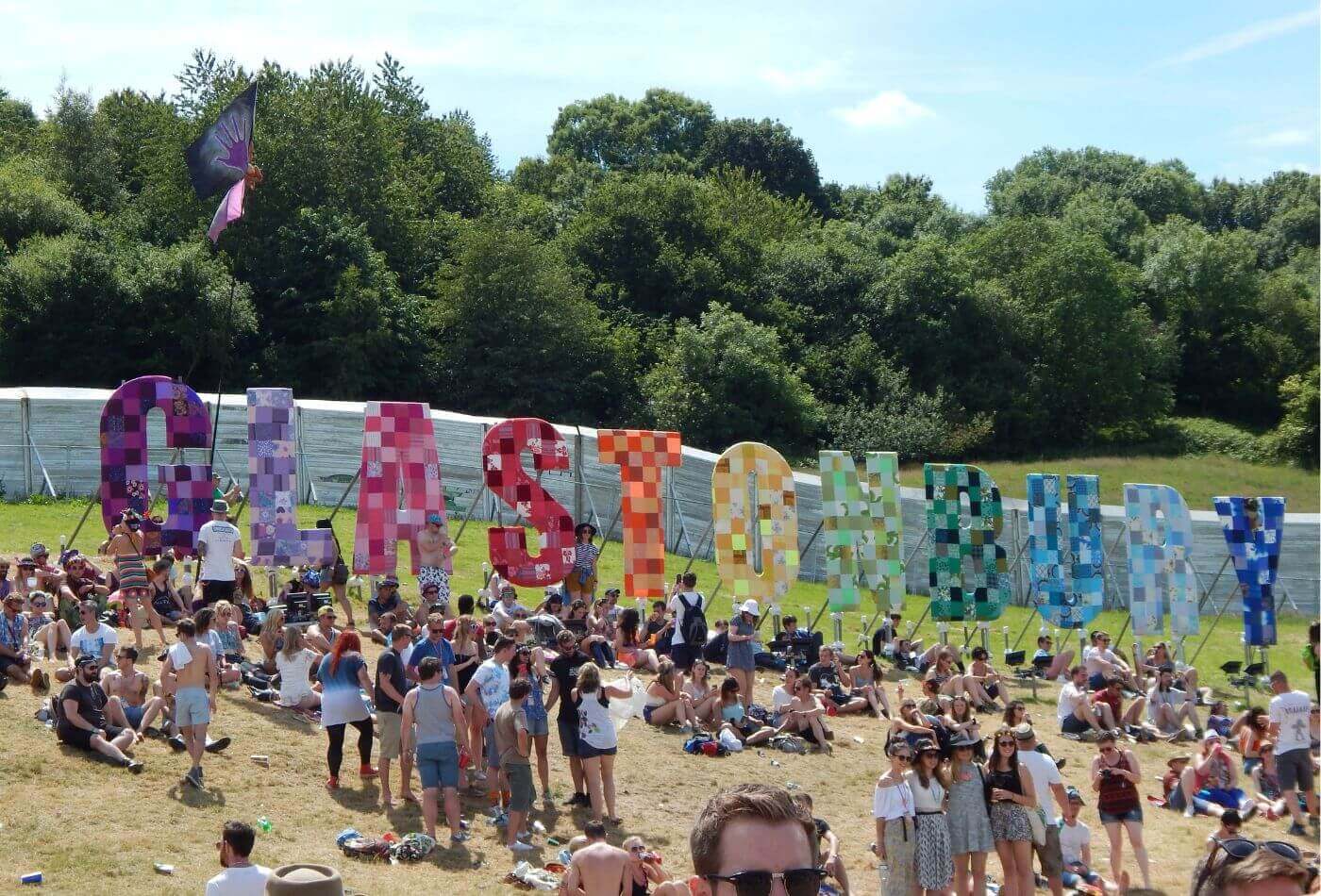 Glastonbury Festival: Everything you want to know!

The festival’s 50th event is coming up on the 22nd June 2022 and we want to answer all of your burning Glastonbury questions!

Unfortunately, the Glastonbury gods were not on my side for this year’s event and I didn’t get tickets.

But instead of dwelling, I thought it would be nice to share a post on all things Glastonbury, one of Somerset’s pride and joys. 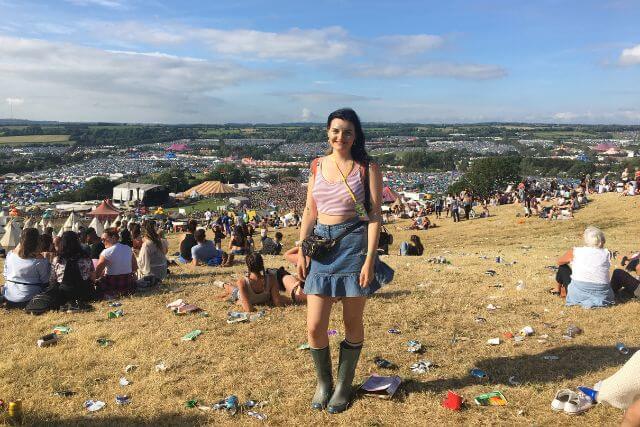 At Helpful Holidays, we have a lovely handful of properties in and around the Glastonbury and Shepton Mallet area.

Don’t save a trip to either town just for the festival though. This beautiful area of Somerset, near the Mendips and the cathedral city of Wells, is a beautiful holiday destination.

Okay, first things first, where is it? Glastonbury Festival takes place on Worthy Farm in Pilton, a village just outside the town of Glastonbury in Somerset.

A scattering of charming villages and hamlets surround Worthy Farm. The stunning Mendip Hills Area of Outstanding Natural Beauty (AONB) sits just over 6 miles north from the festival, as well as the tiny cathedral city of Wells.

Who started Glastonbury and when?

The creator of the iconic Glastonbury Festival is Micheal Eavis. Eavis was inspired to start his own festival after attending the Blues festival at the Bath & West Showground. 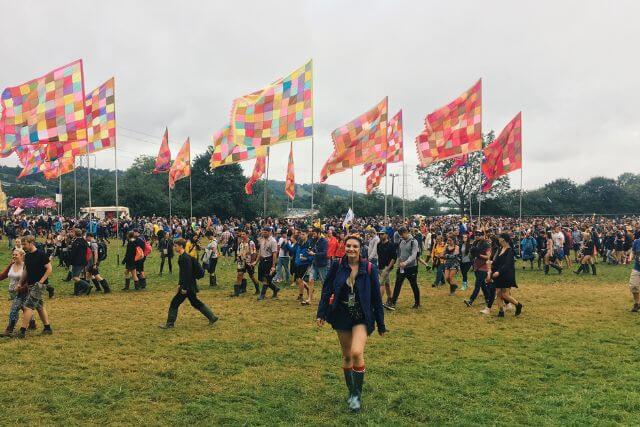 The line up on the poster included Marc Bolan and The Kinks, among several other hot topics. Tickets were just £1 and 1,500 people attended! In the end The Kinks didn’t actually show up, but a pre-abbreviation performance from Tyrannosaurus Rex (T-Rex) and Marc Bolan made a historic performance for those lucky enough to see it.

In 1971, the festival was free with an estimated 12,000 people attending. David Bowie was among the acts on the line up and the first pyramid stage was constructed that year. Below is a picture of the Bowie Aladdin Sane tribute on the pyramid stage in 2016 following the star’s death in January of that year.

Over the years, Glastonbury evolved to become what we know it is today. The line ups got ever more epic, the attendance grew and the name Glastonbury Festival stuck!

What is Glastonbury known for?

Glastonbury is of course known for being an incredible music festival. But it’s also been a huge supporter of a wide range of charities and amazing causes. 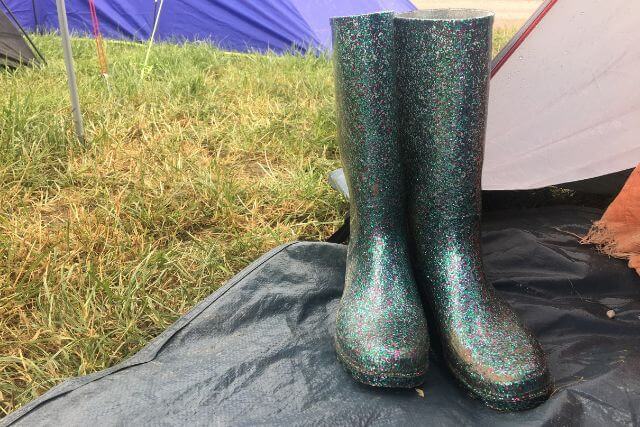 Every year, Glastonbury is partnered with Water Aid, Oxfam, and Greenpeace, and supports more than 750 local charities too.

Since 2000, Glastonbury has contributed over £20 million to charities!

What is the biggest crowd ever at Glastonbury?

There’s no way to know the exact numbers, but it’s thought that The Levellers in 1994 drew the biggest crowd at Glastonbury.

Thanks to a fair amount of gatecrashers, their set managed to pull in an estimated 300,000 strong crowd!

The security in the earlier years wasn’t what it was today. Michael Eavis himself simply stated “the fence wasn’t good enough” and he was “hauled over the coals by the police”. 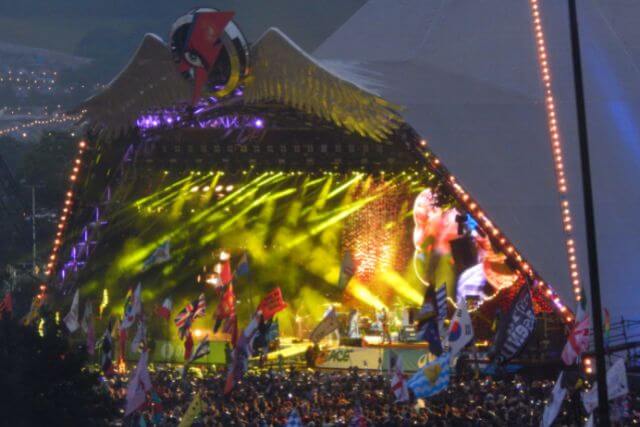 I’ve been among many large crowds at Glastonbury, but one of the most memorable has to be Coldplay headlining in 2016. Festival workers passed around light up bracelets throughout the day for the set later on. 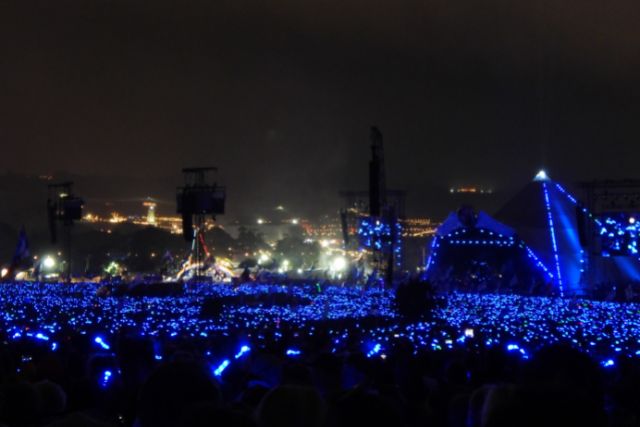 It resulted in a magical display of colours and light stretching out beyond the pyramid stage. My sister and I stood at the back to take in the full views; it was breath-taking!

Who turned down Glastonbury?

It’s hard to believe that an artist or band would turn down the chance to play Glastonbury, but there’s a fair few who have done just that!

The iconic Fleetwood Mac are among those heavily anticipated to play the pyramid stage. It seems it very nearly happened for the planned 50th anniversary, but ultimately the group refused due to the low fee on offer.

Emily Eavis, Michael Eavis’ daughter who now runs the festival, explained that artists get “probably less than 10% of what they’d get from playing any of the other major British festivals”.

There is still hope though. Mick Fleetwood himself was quoted in 2019 saying “I think the legend of Glastonbury and Fleetwood Mac will come true. I think I’ll burn in hell if we don’t do it one day.”

Taylor Swift was announced to play the 50th anniversary headline slot for 2020. But when the festival was delayed due to the covid-19 pandemic, she was unable to commit to the rescheduling this year in 2022.

Other bands and artists who turned down the chance to play Glasto include Led Zeppelin, The Libertines, and Depeche Mode.

Who is the oldest performer at Glastonbury?

The oldest person to headline Glastonbury is soon to be Sir Paul McCartney. In just over a week, Sir Paul will be playing the famous pyramid stage at the grand age of 80 years old.

The record for the oldest person to perform at Glastonbury, including all other stages, actually goes to the late Sir Bruce Forsyth.

Forsyth performed an hour long one man show on the Avalon stage for around 2,500 festival goers in 2013!

How much does a Glastonbury ticket cost?

Over the years Glastonbury tickets have increased in cost due to inflation as you would expect.

Glastonbury Festival’s website explains “every effort was made to keep this increase on the 2020 ticket price…as low as possible…”. They cite the reason for the increase as being due to “…inflation and the impact of two forced cancellations.”

It may seem a little steep, but it does include a lot! Entry to the festival, 5 nights of camping, programmes, and literally 100s of performances. 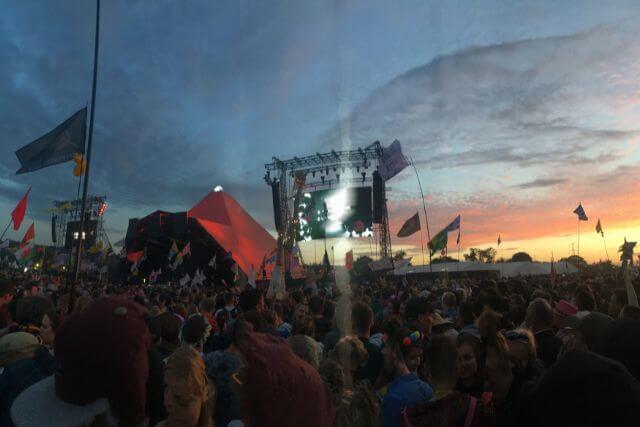 How big is Glastonbury Festival?

It’s the largest greenfield music festival in the world and people aren’t lying when they say it feels like going to another country.

Walking around the endless fields and areas feels like exploring new, vibrant and exciting cities.

The perimeter of the site spans over 8 miles and is more than 1.5 miles across.

Every year around 200,000 festivalgoers call this enormous site home for 5 or 6 nights. Requiring a huge amount of security and infrastructure, the festival runs like a well-oiled machine now that it’s in its 50th year. 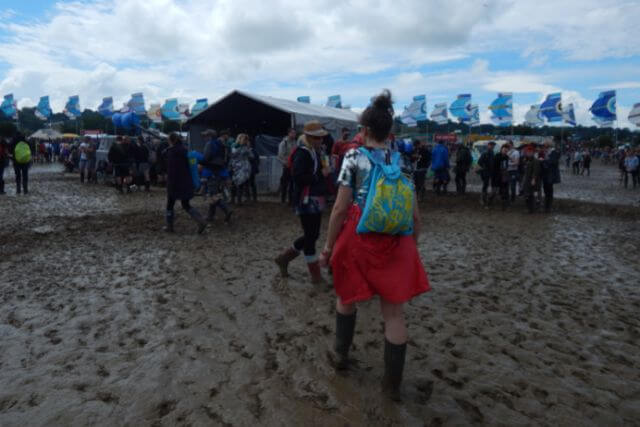 Does Glastonbury make a profit?

Before the Covid-19 pandemic, yes. In June 2019 the BBC reported that the festival’s accounts at the end of March 2018 showed a post-tax profit of £1.43 million, cash reserves of £10.6 million, and charitable donations of £2.1 million.

This year however, due to the two cancellations in 2020 and 2021, the festival has recorded losses of £3.1 million after tax, with a turnover of just less than £1 million.

Emily Eavis has previously stated that they “have to sell out to break even…” as the festival itself costs around £40 million to put on.

What is the best Glastonbury performance ever?

This is a tricky one! But I’ve narrowed it down to a top 6 (in no particular order): 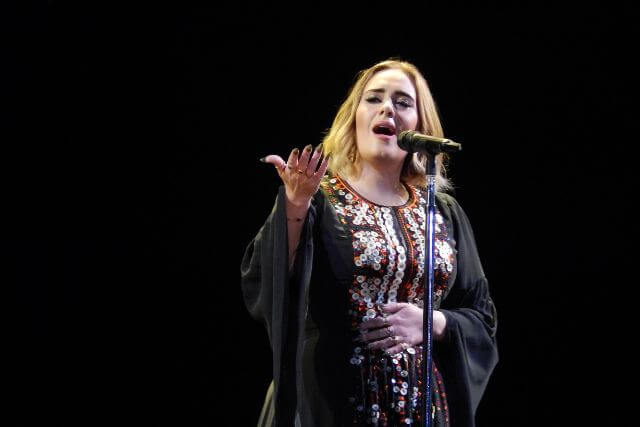 So there we have it, a whistle-stop tour of all things Glastonbury.

All that’s left to say is if you’re going this year, have a brilliant time!

And if you’re not going or have never been, get yourself registered for next year because everyone should experience the magic of Glasto!

Learn more about Somerset by reading our 12 Fascinating Facts About Somerset post and see why the West Country is well worth visiting. 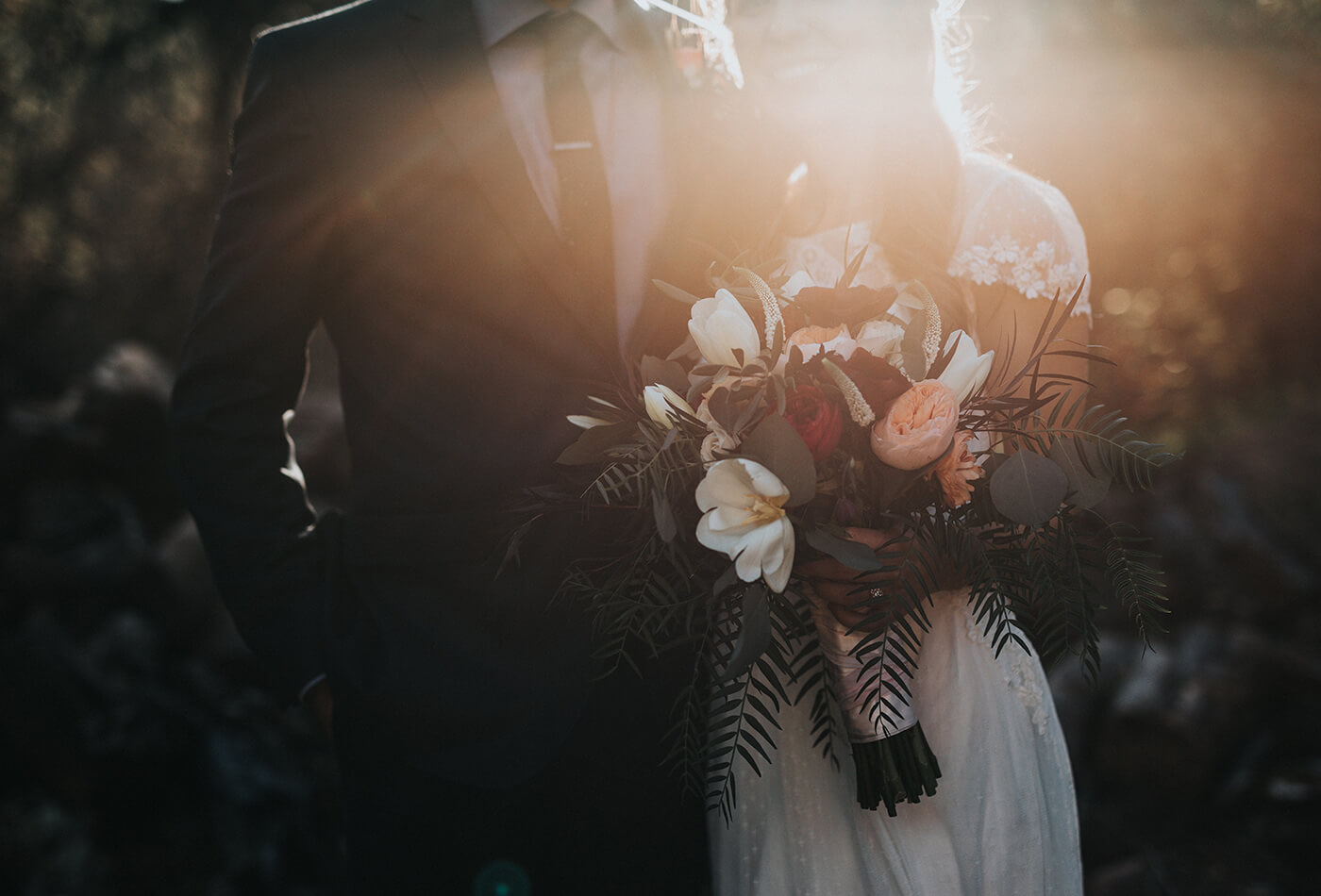